IMDb: 6.0 1982 102 min 424 views
The ape-man, found somewhere in the jungles of Congo, transferred to Milan and named Bingo Bongo. The only one who believes in the human qualities of him is Laura, a woman anthropologist , so their affection for each other even grows to love.
Comedy

IMDb: 5.7 1982 114 min 317 views
Taddeus is the manager of the Grand Hotel Excelsior. The Summer season begins in May and since then many odd persons frequent the hotel. There is Ilde Vivaldi, in love with Taddeus and the boxer Pericle Coccia who has an important match and falls in love with Maria. There is the Mago di Segrate trying to win world fame by ...
Comedy

IMDb: 7.0 1981 100 min 371 views
Cristina is a rich, spoiled princess visiting Rome with her royal parents. The mission of their visit is to marry her off to a super-wealthy corporate type and thereby start to turn around the losses their small kingdom is experiencing in its casino business. These less-than-noble intentions get derailed when Barnaba, a zany bus driver enters their lives and falls ...
Comedy

IMDb: 6.5 1981 90 min 358 views
Asso, THE best poker-player in town, was killed in his wedding night, because he won too much against a bad loser. In the 'final' game in heaven the clerk on duty also lost, so Asso can come back to this world as a ghost to search for a good man for his wife (widow). Who is good enough for the ...
Comedy

The Taming of the Scoundrel

The Taming of the Scoundrel

1980 104 min 460 views
A rich farmer is well known for being very unkind. He's misanthropic, misogynous and cantankerous. Until he meets by chance a gorgeous girl...
Comedy 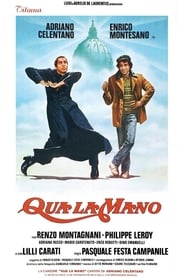 IMDb: 6.1 1980 137 min 2 views
Two episodes: A roman coachman fulfills the dream of his life and meets the Pope. A priest crazy about dancing wins the first prize in a contest.
Comedy