IMDb: 2.8 1998 93 min 357 views
Three young boys, Rocky, Colt and Tum Tum together with their neighbor girl, computer whiz Amanda are visiting Mega Mountain amusement park when it is invaded by an army of ninjas led by evil Medusa, who wants to take over the park and hold the owners for ransom. Kids and retired TV star Dave Dragon, who made his farewell appearance ...
ActionComedyFamily

IMDb: 4.4 1994 93 min 457 views
During a championship baseball match, the three brothers hear that their grandfather in Japan is in trouble, and head out to help him, conceding the match. When they arrive in Japan, they must use all their powers to defend him against his ancient enemy, who has returned to exact revenge.
ActionAdventureComedyFamily 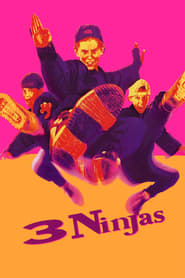 IMDb: 5.2 1992 84 min 395 views
Each year, three brothers Samuel, Jeffrey and Michael Douglas visits their Japanese grandfather, Mori Shintaro whom the boys affectionately refer to as Grandpa, for the summer. Mori is a highly skilled in the fields of Martial arts and Ninjutsu, and for years he has trained the boys in his techniques. After an organized crime ring proves to be too much ...
ActionAdventureComedyFamily