IMDb: 7.3 2013 143 min 711 views
An adaptation of F. Scott Fitzgerald's Long Island-set novel, where Midwesterner Nick Carraway is lured into the lavish world of his neighbor, Jay Gatsby. Soon enough, however, Carraway will see through the cracks of Gatsby's nouveau riche existence, where obsession, madness, and tragedy await.
DramaRomance 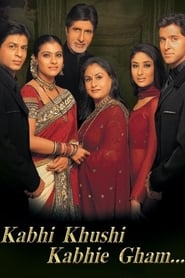 IMDb: 7.5 2001 210 min 507 views
Orthodox Indian, Raichand, would like his two sons to live together with him and his wife, and get married to girls' of his choice. One of his sons, Rahul, is adopted, while Rohan is his real son. Rahul falls in love with a poor Indian girl named Anjali, and incurs the displeasure of Raichand, they argue and fight, as a ...
ComedyDrama

IMDb: 7.4 1984 396 views
Born with a silver spoon in his mouth, and a peg of brandy instead of a glass milk, Vicky Kapoor, the only son of multi-millionaire industrialist, Amarnath, grows up to be an alcoholic, albeit with a good heart. Amarnath has detached himself completely from Vicky s life, and provides him money in lieu of affection and care, living this to ...
DramaRomance

IMDb: 6.8 1980 152 min 491 views
Vijay and Ravi are best friends (hence the name 'Dostana') who do not even question each other about their careers. Vijay, a police officer and Ravi, a lawyer, while the former catches the criminals who smuggle, Ravi on the other hand bail those criminals, employed by Daaga. One day, both Vijay and Ravi meet Sheetal at different places and times, ...
Drama