IMDb: 7.7 1993 254 min 460 views
Summer 1863. The Confederacy pushes north into Pennsylvania. Union divisions converge to face them. The two great armies clash at Gettysburg, site of a theology school. For three days, through such legendary actions as Little Round Top and Pickett's Charge, the fate of "one nation, indivisible" hangs in the balance.
DramaHistoryWar

IMDb: 4.5 1986 96 min 353 views
A former pilot rebels against his creator, teaming up with the scientist responsible for android technology, her pet robot Spot, a rough-and-tumble riverboat guide, and a martial arts warrior.
ActionScience Fiction 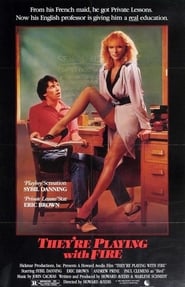 IMDb: 5.0 1984 96 min 378 views
A married college professor decides to seduce her student, whom she hired as a handyman for her yacht. The hesitant student succumbs to his buxom professor, but their romance is interrupted by her corrupt husband and a masked murderer.
CrimeHorrorThriller

IMDb: 5.5 1982 104 min 339 views
The Lutz family have managed to flee their home with their lives intact, but before them, another family lived in this house and were caught up in the original evil who weren't so lucky...
Horror