IMDb: 6.2 1995 108 min 367 views
Professor David Ash exposes false spiritulists and mediums. He is invited to Edbrook to resolve the fears and torments within its secretive family. Soon after arriving Ash begins to doubt his own senses, and watching the strange behaviour of its residents does not make his task any easier. In time, he finds there's more to Edbrook than even he can ...
HorrorMystery

IMDb: 5.7 1985 112 min 369 views
A man who was a confidant of Adolf Hitler dies and leaves a fortune to make amends for his Nazi past--but his son has to search the world to find it
ActionThriller 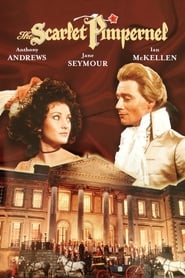 IMDb: 7.7 1982 142 min 411 views
During the French Revolution, a mysterious English nobleman known only as The Scarlet Pimpernel (a humble wayside flower), snatches French aristos from the jaws of the guillotine, while posing as the foppish Sir Percy Blakeney in society. Percy falls for and marries the beautiful actress Marguerite St. Just, but she is involved with Chauvelin and Robespierre, and Percy's marriage to ...
ActionDramaRomanceTV Movie