2006 149 min 583 views
When the curator of the Louvre is found murdered in the famed museum's hallowed halls, Harvard professor, Robert Langdon and cryptographer, Sophie Neve must untangle a deadly web of deceit involving the works of Leonardo da Vinci.
MysteryThriller

IMDb: 7.7 2004 133 min 534 views
In 1919, Mathilde was 19 years old. Two years earlier, her fiancé Manech left for the front at the Somme. Like millions of others he was "killed on the field of battle." It's written in black and white on the official notice. But Mathilde refuses to believe it. If Manech had died, she would know. She hangs on to her ...
DramaRomance 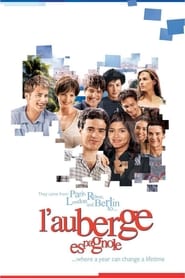 IMDb: 7.3 2002 122 min 370 views
A strait-laced French student moves into an apartment in Barcelona with a cast of six other characters from all over Europe. Together, they speak the international language of love and friendship.
ComedyDramaRomance

IMDb: 7.2 2002 92 min 363 views
Angelique, a young student, is in love with a married doctor. We see her attempts to make him leave his pregnant wife, but he does not appear for meetings or finally the booked journey to Florence. Then the movie is turned back to the beginning, and the view changes: We are now following the view of the doctor instead of ...
DramaRomanceThriller

IMDb: 8.3 2001 122 min 470 views
At a tiny Parisian café, the adorable yet painfully shy Amélie (Audrey Tautou) accidentally discovers a gift for helping others. Soon Amelie is spending her days as a matchmaker, guardian angel, and all-around do-gooder. But when she bumps into a handsome stranger, will she find the courage to become the star of her very own love story?
ComedyRomance