2013 106 min 624 views
The haunted Lambert family seeks to uncover the mysterious childhood secret that has left them dangerously connected to the spirit world.
HorrorThriller

2010 108 min 624 views
A ballet dancer wins the lead in "Swan Lake" and is perfect for the role of the delicate White Swan - Princess Odette - but slowly loses her mind as she becomes more and more like Odile, the Black Swan.
DramaThriller

2010 103 min 1193 views
A family discovers that dark spirits have invaded their home after their son inexplicably falls into an endless sleep. When they reach out to a professional for help, they learn things are a lot more personal than they thought.
HorrorThriller

The Portrait of a Lady

The Portrait of a Lady

IMDb: 6.3 1996 144 min 354 views
Ms. Isabel Archer isn't afraid to challenge societal norms. Impressed by her free spirit, her kindhearted cousin writes her into his fatally ill father's will. Suddenly rich and independent, Isabelle ventures into the world, along the way befriending a cynical intellectual and romancing an art enthusiast. However, the advantage of her affluence is called into question when she realizes the ...
DramaRomance 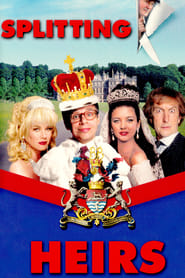 IMDb: 5.5 1993 87 min 372 views
A member of the English upper class dies, leaving his estate and his business to an American, whom he thinks is his son who was lost as a baby and then found again. An Englishman who thinks he is an Indian comes to believe that he is actually the heir. He comes to hate the American who is his boss, ...
Comedy

IMDb: 6.8 1993 112 min 410 views
The story of a close-knit group of young kids in Nazi Germany who listen to banned swing music from the US. Soon dancing and fun leads to more difficult choices as the Nazi's begin tightening the grip on Germany. Each member of the group is forced to face some tough choices about right, wrong, and survival.
DramaMusic

IMDb: 7.6 1993 113 min 474 views
On the day of his daughter's birthday, William "D-Fens" Foster is trying to get to the home of his estranged ex-wife to see his daughter. His car breaks down, so he leaves his car in a traffic jam in Los Angeles and decides to walk. He goes to a convenience store and tries to get some change for a phone ...
CrimeDramaThriller

IMDb: 6.8 1988 123 min 427 views
A privileged rich debutante and a cynical struggling entertainer share a turbulent, but strong childhood friendship over the years.
ComedyDrama

IMDb: 7.6 1988 164 min 337 views
Jesus, a humble Judean carpenter beginning to see that he is the son of God, is drawn into revolutionary action against the Roman occupiers by Judas -- despite his protestations that love, not violence, is the path to salvation. The burden of being the savior of mankind torments Jesus throughout his life, leading him to doubt. As he is put ...
Drama

IMDb: 7.6 1986 114 min 459 views
High school basketball is king in small-town Indiana, and the 1954 Hickory Huskers are all hope and no talent. But their new coach -- abrasive, unlikable Norman Dale -- whips the team into shape ... while also inciting controversy.
DramaFamily

Hannah and Her Sisters

Hannah and Her Sisters

IMDb: 7.9 1986 107 min 342 views
Between two Thanksgivings, Hannah's husband falls in love with her sister Lee, while her hypochondriac ex-husband rekindles his relationship with her sister Holly.
ComedyDrama

IMDb: 7.5 1984 137 min 339 views
An unknown middle-aged batter named Roy Hobbs with a mysterious past appears out of nowhere to take a losing 1930s baseball team to the top of the league.
Drama

IMDb: 7.9 1983 193 min 410 views
A chronicle of the original Mercury astronauts in the formation of America's space program: Alan Shepherd, the first American in space; Gus Grissom, the benighted astronaut for whom nothing works out as planned; John Glenn, the straight-arrow 'boy scout' of the bunch who was the first American to orbit the earth; and the remaining pilots: Deke Slayton, Scott Carpenter and ...
DramaHistory

IMDb: 6.6 1982 125 min 391 views
Barbara Hershey stars as Carla Moran, a hard-working single mother until the night she is raped in her bedroom by someone - or something - that she cannot see. Despite skeptical psychiatrists, she is repeatedly attacked in her car, in the bath, and in front of her children. Could this be a case of hysteria, a manifestation of childhood sexual ...
HorrorMysteryThriller

1980 131 min 524 views
While on the run from the police, Steve Railsback hides in a group of moviemakers where he pretends to be a stunt man. Both aided and endangered by the director (Peter O'Toole) he avoids both the police and sudden death as a stuntman. The mixture of real danger and fantasy of the movie is an interesting twist for the viewer ...
ActionComedyDramaThriller