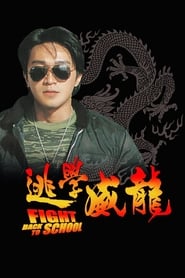 Fight Back to School

Fight Back to School

IMDb: 7.1 1991 100 min 332 views
Star Chow (Stephen Chow) is about to be kicked out of the Royal Hong Kong Police's elite Special Duties Unit (SDU). But a senior officer decides to give him one last chance: Star must go undercover as a student at the Edinburgh High School in Hong Kong to recover the senior officer's missing revolver. The undercover operation is made complicated ...
ActionComedy

IMDb: 6.6 1990 101 min 491 views
Two cops--both best friends and partners--both become the subject of a beautiful news reporter's documentary. The two soon find themselves competing for screen time as well as the love of the reporter while after a murderous arms dealer.
ActionComedy

IMDb: 7.9 1989 110 min 453 views
Mob assassin Jeffrey is no ordinary hired gun; the best in his business, he views his chosen profession as a calling rather than simply a job. So, when beautiful nightclub chanteuse Jennie is blinded in the crossfire of his most recent hit, Jeffrey chooses to retire after one last job to pay for his unintended victim's sight-restoring operation. But when ...
ActionCrimeDramaThriller