2016 109 min 847 views
Tarzan, having acclimated to life in London, is called back to his former home in the jungle to investigate the activities at a mining encampment.
ActionAdventure

IMDb: 7.4 2015 106 min 369 views
An eight-year-old boy is willing to do whatever it takes to end World War II so he can bring his father home. The story reveals the indescribable love a father has for his little boy and the love a son has for his father.
ComedyDramaWar

2015 105 min 838 views
When her father unexpectedly passes away, young Ella finds herself at the mercy of her cruel stepmother and her daughters. Never one to give up hope, Ella's fortunes begin to change after meeting a dashing stranger in the woods.
DramaFamilyFantasyRomance

IMDb: 6.2 2010 103 min 675 views
A parolee battles a gangster for the affections of a reclusive movie star.
CrimeDrama

IMDb: 6.3 2009 112 min 488 views
A vain London playboy offers his soul in exchange for eternal beauty in this adaptation of the chilling tale by author Oscar Wilde. Seduced into the decadent world of Lord Henry Wotton (Colin Firth), handsome young aristocrat Dorian Gray (Ben Barnes) becomes obsessed with maintaining his youthful appearance, and commissions a special portrait that will weather the winds of time ...
DramaFantasyThriller

IMDb: 7.6 1998 170 min 1452 views
Based on the graphic novel by James Jones, The Thin Red Line tells the story of a group of men, an Army Rifle company called C-for-Charlie, who change, suffer, and ultimately make essential discoveries about themselves during the fierce World War II battle of Guadalcanal. It follows their journey, from the surprise of an unopposed landing, through the bloody and ...
DramaHistoryWar 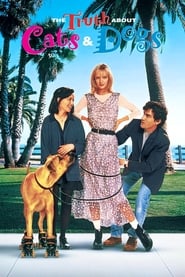 The Truth About Cats & Dogs

The Truth About Cats & Dogs

IMDb: 6.3 1996 93 min 358 views
A successful veterinarian and radio show host with low self-esteem asks her model friend to impersonate her when a handsome man wants to see her.
ComedyRomance

IMDb: 7.9 1993 134 min 480 views
A rule bound head butler's world of manners and decorum in the household he maintains is tested by the arrival of a housekeeper who falls in love with him in post-WWI Britain. The possibility of romance and his master's cultivation of ties with the Nazi cause challenge his carefully maintained veneer of servitude.
DramaRomance