Shadow of the Wolf

Shadow of the Wolf

IMDb: 5.8 1992 112 min 395 views
In the 1930's, Agaguk lives his traditional Inuit life. But one day, there is a murder in the tribe and Agaguk becomes a suspect. Soon he becomes persecuted by Henderson, a mean mountie, and he must flee through the cold winter of Northen Quebec.
AdventureDramaThriller

IMDb: 5.4 1984 489 views
In this run-of-the-mill crime drama, Bernard Giraudeau is Daniel Chetman, someone who wants to leave the life of violence he knew in his neighborhood -- and cannot do so because his nemesis, a strutting street gangster now involved with organized crime, continues to terrorize the inhabitants of Chetman's turf. After much spilled blood, a parade of ugly underground types, and ...
Crime 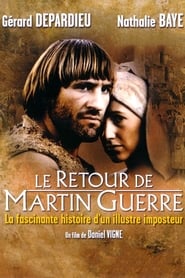 The Return of Martin Guerre

The Return of Martin Guerre

IMDb: 7.4 1982 122 min 379 views
During the medieval times, Martin Guerre returns to his hometown in the middle of France, after being away in the war since he was a child. Nobody recognise him, and the people who knew him suspect he is not Martin, but he knows all about his family and friends, even the most unusual things. Is this man really Martin Guerre?
CrimeDramaHistoryMysteryRomance

IMDb: 7.6 1981 108 min 467 views
French secret agent Joss Baumont is sent to kill the president Njala of an African country. However, a counter-order is given before he can execute his mission and he is abandoned in the hands of foreign authorities. He escapes and seeks revenge by pursuing what was his original mission.
ActionAdventureThriller