IMDb: 5.7 1991 104 min 334 views
A loathsome man ends up dead, but it's not clear who's to blame. If ever a person got what he deserved, it's James Urbanksi, an abusive drunk who steals from his wife, Joyce, and promises her close friend Cynthia Kellogg that she'll be the next target of his rage. At a group outing, James bleeds to death after someone cuts ...
DramaMysteryThriller 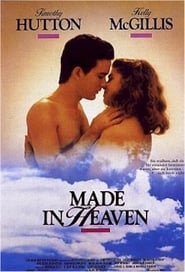 IMDb: 6.5 1987 103 min 439 views
A romantic, occasionally funny, drama about two souls who consummate their marriage literally in "Heaven". Mike Shea, in his first life dies as a young man performing a heroic rescue. Shortly after arriving in "Heaven" he meets a new soul, Annie Packert, who has never lived on Earth before. The drama centers around their separation soon after being wedded and ...
ComedyDramaFantasyRomance

IMDb: 6.8 1984 106 min 351 views
Several lost-soul night-owls, including a nightclub owner, a talkback radio relationships counseller, and an itinerant stranger have encounters that expose their contradictions and anxieties about love and acceptance.
ComedyDramaRomance